The following diagram shows the possible transitions between the four architectural patterns. 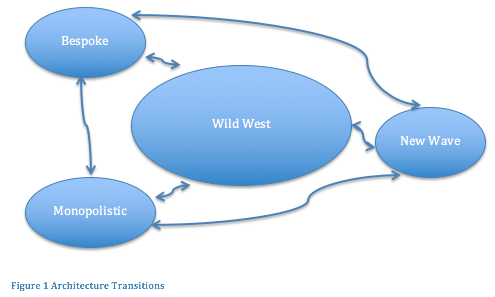 The following paragraphs describe the possible architecture transitions and the drivers and possible reasons behind them.

A transition in this direction would only occur if a company managed to find a COTS package that could deliver the functionality that was not available when it developed it’s own bespoke solution.  This would indicate that they were happy to lose the investment they made in the bespoke solution; this may be due to a shift in business model, support of the bespoke solution or technology changes. With the proliferation of COTS packages this is more and more rare than it used to be, and is extremely unlikely in anything but small enterprises simply down to the main reason for developing bespoke solutions being to gain a commercial advantage using technology.

The main reason for taking this path would be that a COTS package has appeared that can deliver all of the capabilities of the bespoke package that has been developed. Based on the reasoning for being in this position – i.e. our main competitive advantage is our bespoke solution – if this occurred then the business would have significant issues in the marketplace and have to look for another commercial advantage.

Resistance to this path would include:

This is a common migration and starts when IT starts to expand and begins integrations. Due to the existence of EA skills in the Bespoke model there is a chance this can be avoided the migration can go straight to new wave, but due to differing skill sets this first step will probably be in the form of a point to point solution and will progress towards a wild west architecture. This is usually triggered when a COTS package is added to the bespoke systems landscape.

In the best case the bespoke system EA will identify the future need to replace this system and de-couple the integration. If this is done there is a change that we could move directly from bespoke to new wave but at the time of writing this is a rare transition.

This is a very common transition whereby more and more systems are bolted on to the architecture using point to point solutions. Due to the lack of EA skills point to point integrations are likely to be used which will cause issues further down the line.

This  would be an ideal migration path but due to lack of EA skills and understanding of experience of the problems of the Wild West architecture and costs associated with the new wave architecture, this is a path that is not well trodden.  However taking this path early is a key to saving time and money later on.

This is a path that organizations that are suffering from the inefficiencies of Wild West architectures should aim to tread. It offers many advantages but does require some thought.

Resistance to this path will include:

This path would take an organization from a flexible organized model to a chaotic model and is unlikely to be a path that is followed. It is however likely, and has been seen in the past, that after a failure of an Enterprise Architecture review many people return in this path after losing sight of the goals.

Reasons for taking this path:

Resistance would only come from those who believed that the wild west is not a good place to be for an organization and that the new wave does bring benefits.

It is hard to imagine any organization taking this path, other than by replacing all the components in their landscape with bespoke capabilities. This would require an enterprise (large organization) believing that it could design and build all aspects of its IT landscape better and cheaper than specialized COTS players.

This path would be trodden only by enterprises that believed that none of their best of breed systems could now offer any competitive advantage over the single system they were considering moving to. This is not to say that several parts of an enterprise’s architectural landscape may be replaced by a single system, but rarely all aspects.

This tends to be done through general release management, it would be rare to see a large enterprise based on a bespoke system initiate a completely new development that was not an increment on the first.

Aside from upgrading the existing system, this could occur for a number of reasons. If this does occur then it is likely that this is one of the few places where a big bang approach to migration will be the most appropriate.

In this architecture there is continual movement and a such this transition will be happening on a weekly or monthly basis.

This is possible but will take place in a piecemeal controlled manner with the new target architecture and any benefits it brings firmly understood.

[1] SAP or Oracle ERP are possible exceptions here but although I have heard they exist I have not recently seen a complete enterprise run on just one IT system .

[2] Be very wary of architectures using early agile methods as these tend to be extremely lightly documented.

[3] Give a single 10 step sequence of instructions to 2 people and they are likely to do at most 7 the same way.

[4] This is really a last ditch option as you would be doing something completely new in a production system which is highly risky.

[5] This can be prevalent to development staff close to retirement age.

[6] This can be prevalent to development staff close to retirement age.